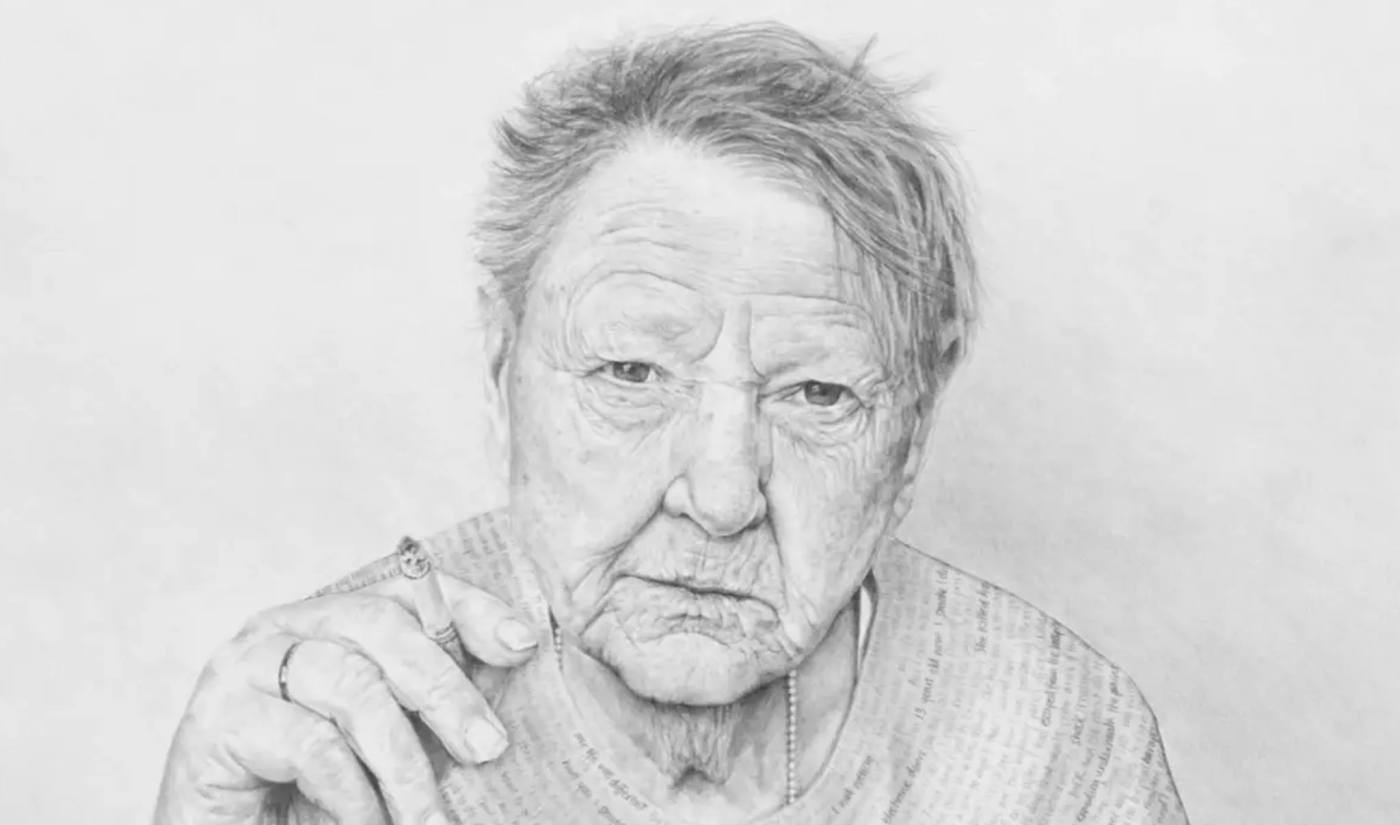 Highlighting those who are making the most out of the second half of their lives, this program confirms that growing older is what the luckiest amongst us get to do. Proving that anything is possible in our later years, including deep reflections on earlier years, sage wisdom for tomorrow and private sex parties in the moment. Let us celebrate the joy of living with these compassionately transgressive international films.

Zuzu Knew Syngja Frances Adair Mckenzie Debora Alanna
New Spring (2017)
4.53 minutes
“Mountain Queen” is our reinterpretation of an Icelandic text that Tyr and Zuzu’s great grandmother sang about the female incarnation and national personification of Iceland, “Mountain Queen, Our Mother” (Fjallkona). We have dressed up our own mother, Debora Alanna, as the Lady of the Mountains, with new original music created by Syngja, costume and animations by Zuzu and Frances Adair, surrounded by the majestic Dynjandi waterfall and the West Fjords of Iceland. We have mixed family archives with new created media to link 4 generations of women as they arc through time.

David Meran
GRANDFATHER / ME / 3RD PERSON (2016)
1.18 minutes, Berlin Premiere
My grandfather, who is the projection of an old photograph in the video, had to flee in the 1920s from the north of Italy to Austria, escaping from the Italian fascists. Ever since then, this traumatic memory has created constant pain and struggle within our family. He fought in World War Two in the German Air Force. He fell in love with my Austrian grandmother and stayed in a small city in upper- Austria near where I grew up. He is dead for a long time now, but during his life he suffered from this time period and was unable to talk about it. My family members tell me that I look like him. Where do we come from and can we run away from your genetics, or can we change our inherited identities? The topics of affiliation, assimilation and my queer identity have been on my mind my entire life. This video shows an artistic expression of my aged grandfather who has now passed.

BCRW Videos
The Personal Things (2016)
3.04 minutes, Berlin Premiere
“You have to find your own way to strike back.” Black trans elder and legendary activist Miss Major Griffin-Gracy describes how everyday personal acts fuel her political activism. Released in conjunction with Trans Day of Resilience/Remembrance, this short, directed by Reina Gossett with art by Micah Bazant and animation by Pamela Chavez was produced by Reina Gossett, Hope Dector, and the Barnard Center for Research on Women.

Claudia Biçen
Randy (2016), 3.05 minutes
European Premiere
Randy was the first person I interviewed for this project. I met him on Tuesday mornings in his room at Maitri Compassionate Care in Duboce Park, San Francisco. We would sit and talk for about an hour, or until he felt too short of breath due to his lung cancer. The N train would periodically clack down the road outside and there were several pairs of cowboy boots stacked neatly along the wall from Randy’s rodeo days. As a gay man, Randy never felt at home in Tennessee and spent his whole life moving through America’s major liberal cities. Plagued by a nihilism that was pacified by drugs, alcohol and sex, Randy eventually turned to God to find his solace. He told me that it was only through this loving God that he found the strength to forgive himself and accept his life. Randy died on September 27, 2014.

Silvia Maggi & Silvia Radicioni
26 de Diciembre #Brenda (2017)
1.40 minutes, World Premiere
26 de Diciembre’ documentary is a colorful and inspiring story about an elderly LGBT community in Spain. Their daily community center serves a connected crowd within the wider circles of Madrid, with their heart based in Lavapies. They are fighting for several shared living spaces, to give voice to their ideology: growing old together with your beloved ones in an inspiring, warmhearted and open minded space. A place that let you continue living the way you prefer, a place where stigmatisation, isolation and discrimination are not welcome, a place where you feel at home, a place for the communal minded individual.

Sarah Mangle
Roger (2017)
1.58 minutes,  World Premiere
This is a part of a series called The Halls of Wickwire

Sasha Wortzel
Paint it Again (2011)
5.15 minutes
Paint it Again explores the home shared by a woman and her late partner for over 40 years. Now the home of only one surviving partner, the space has become museum-like. Meticulously arranged and decorated, the house is full of objects like artifacts that hold memories and hint at a life shared in this space, a life that is now gone.

Jamie Ross
Ar n-Athair (2017)
1.43 minutes,  World Premiere
My settler family measured land through prayer. Small groups of people would walk a distance together, reciting a prayer together as an ad hoc unit of measurement. My pagan theology often draws from the recuperation of the Scottish Gaelic language which I am spearheading in my family, the grandchildren remembering for the grandparents. This is the first time my great aunt Olive heard this prayer in 90 years. I walk her from her kitchen down towards the river.”

Tony Osso
The Devotion Project
Gail and Audrey: An Unexpected Love Story (2013)
4.14 minutes,  Berlin Premiere
“Have you met my wife?” that’s how Audrey Smaltz introduces people to her wife former Olympian Gail Marquis. “Foremost in My Mind” is a vivid portrait of their life and marriage. www.thedevotionproject.org

Claudia Biçen
Jenny (2016)
3.05 minutes,  European Premiere
When I met Jenny through Pathways Hospice, she was living in an SRO building in San Francisco’s Tenderloin district. Surrounded by a lifetime’s work of stunningly intricate paintings and sculptures, Jenny would monologue for an hour, stopping only to light another cigarette and slurp on her grape soda. Jenny was an artist in the purest form: she was compelled to create and she did so in order to heal herself. Jenny explained that all the way through her life – through physical and sexual abuse, hospitalization, mental illness and homelessness – art had been the thing that saved her. In September 2015, Jenny’s portrait was selected be exhibited at the Smithsonian Institution in Washington DC. When Jenny and I went out for lunch to celebrate, she told me that participating in this project had validated her life.

The Golden Brown Girls
Indrani Ashe and Shannon L
Flash Forward (2016)
11.58 minutes,  World Premiere
The Golden Brown Girls is a socially engaged, collaborative art project and homage to the American sitcom The Golden Girls, where 4 women over 50 live together post divorces, children etc to reinvigorate their sense of identity apart from these things. By creating a fulfilled, alternative future space fuelled by mutual support, intimacy and laughter, we aim to transform ourselves into the protagonist of a newly created multiverse.

To create Flashforward we collaborated with British Asian actresses Norma Dixit, Sakuntala Ramanee, and Gurkiran Kaur as well as playwright Subika Anwar. Women from vastly different generations imagined themselves in each others’ bodies to imagine growing old together in nonheteronormative fashion. thegoldenbrowngirls.com

Silvia Maggi & Silvia Radicioni
26 de Diciembre #Picobello (2017)
4.01 minutes,  World Premiere
A generation that lived under the dictatorship of Franco and that is now, in all their freedom, facing the aftershock of the economical crisis. Gentrification is taking place, and there is hardly any governmental money for elderly care and pensions. ‘La Fundación 26 de Diciembre’ is a collective that has a strong social vision on alternative ways of communal living for elders, with answers to physical and mental care, introductions to new contemporary changes and hiv positive education. Full of joy and charisma, they fight for a better world and they are desperately asking for support. They are currently voluntary based and are the only collective in Southern Europe that gives voice this pressing need for alternative LGBT housing. With an estimation of 31.600 elderly LGBT inhabitants living in Madrid, justification is required for a non-discriminatory elderly care system.

Claire Nolan
Public Service Announcement: Peggy Shaw (2015)
3.15 minutes, Berlin Premiere
Produced in response to our work with stroke survivors as part of Science Stroke Art with the Stroke Association North West, the legendary Peggy Shaw makes use of her solo performance Ruff to recognise the signs and symptoms of stroke. With her own iconic style and a rocking beat, Peggy Shaw’s Public Service Announcement shows you a thing or two about being F.A.S.T!

Claudia Biçen
Daniel (2016)
2.44 minutes,  European Premiere
Introduced through Hospice by the Bay, Daniel and I met weekly in his room in a high-rise SRO block in San Francisco’s SOMA. A graduate of Harvard University and friends with Spanish royalty, Daniel lost all of his wealth when he was cut out of his father’s business empire and struggled with mental health issues. Now sharing hallways with the city’s most disenfranchised residents, Daniel would still go for caviar and champagne once a week using money from his estranged son. Daniel was adamant that death did not trouble him and that he was simply letting the “gentle flow of a river” carry him towards the end. Several weeks after our interviews were completed, I went to visit him at Coming Home Hospice in San Francisco. In floods of tears and wrecked with terror, Daniel held onto me like a child. The next day, on July 22, 2015, Daniel died alone in his room.

Coral Short is an interdisciplinary artist and curator residing in Berlin; this year marks a career milestone when they reach a decade of programming experimental video and film. Their curatorial practice explores queer experience with a particular attention to works that underline and question the ways aesthetics act as a form of political discourse. Their interests center around themes of the body, sexuality, identity politics, spirituality, and the queer future. Coral gathers the collective imaginings of their community through public and private dialogue to produce projects such as this ongoing film series. http://www.coralshort.com/

This is Ryan Backer‘s curatorial debut. They are a filmmaker and graduated with a degree in Gerontology (the bio/psycho/social study of aging) and Black Studies. They were a long time volunteer and intern at SAGE and SAGE NYC, organizations which advocate for and give support to queer elders. They were also a proud participant of the first installment of the TransGenerational Theatre Project and worked for the NYC MIX Film Festival. They are currently squatting in Dublin and busking poetry with a typewriter, while also caregiving.

Thank you also to Quecke for support with this project.